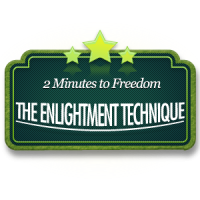 Do you care about reaching a higher state of consciousness? The Enlightenment-Technique is a very simple 2-minute method of spiritual self-inquiry.

Do you care about reaching a higher state of consciousness? The Enlightenment-Technique is a very simple 2-minute method of spiritual self-inquiry. It is…

* The one psycho-spiritual technique that replaces all others

* The one technique that has as its basis the highest powers of all: Unconditional Love

* The one technique that uncovers subconscious limiting beliefs

* The one technique that leads to techniques becoming obsolete

* The one technique that unites eastern enlightenment-teachings with western psychology.

The Enlightenment-Technique was developed in my inner research-lab as the answer to the question: “How can my students access more rapid psychological and spiritual growth and success in life?” The Technique is presented in a 45-Minute Audio-Program you listen to, as well as a 4-Part Video Course. It is a simple 2-minute-technique, but it must be presented in the proper context to be appreciated and properly used.

The Technique is based on the peculiar idea that you don’t experience reality as it is, but as you are. The subconscious roles and “belief-glasses” through which you see reality act as a prism or filter, allowing you to perceive and experience only a very small band or frequency of reality. The higher state aimed for is that of your “true self”, “soul” or “higher self”. What obstructs this super-high-state and clear view are numerous mostly subconscious roles, masks “personas” that you and others play that filter everything you experience.

That’s why this technique does not look at what is being seen, heard or experienced but rather WHO (which version of you) is experiencing those many things. It can be applied to any subject, thing, person, place, idea, emotion, memory, thought, belief, space, time, situation. Applied repeatedly, it is like peeling an onion until all that is left is your real Essence.

The intricacies, variations and deeper layers of this simple technique are introduced in an eBook and Audio-Program which you can purchase access to. You cannot Download the eBook or the Audio, you can only use it on this website in the privacy of your home. Why? Because this is the real thing and must be presented, learned and used in a special context only. In the wrong hands and taught wrongly it is misapplied. In the right hands it becomes a jewel of wisdom and rapid consciousness expansion.

In the few years I have been using this tool with coachees who are ready for it. I am now making an easily applicable 2-minute version of it available for the general public. In considering for what price to offer this tool I thought that if I ask what its really worth, nobody could or would afford it. It has helped countless students increase their energy, health, finances, intelligence, emotional freedom and day-to-day appreciation of life and abilities, so what is that worth? Priceless perhaps. But if I asked too little money for it, it will be devalued and neither appreciated nor used with proper dedication. So the price presented here is something almost anyone can afford without devaluing it. Purchase your copy now and enjoy your personal journey to Enlightenment. You will literally never be the same person again.

The Enlightenment-Technique is now available for FREE and exclusively to Members of Reality Creation.

The most empowering question you can ask yourself is: Where is my awareness right now and where would I like it to be?