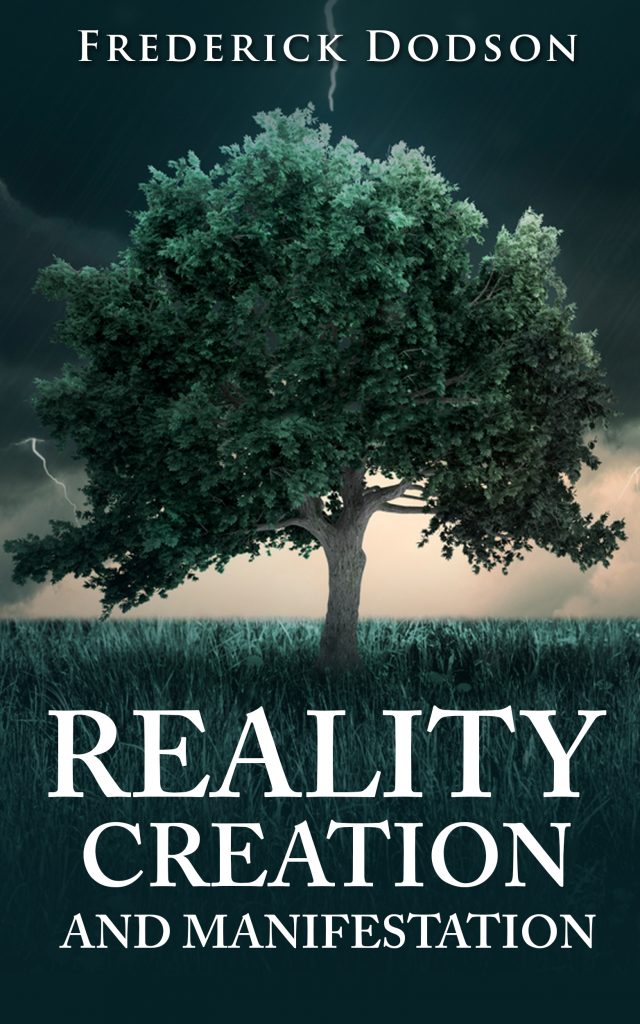 To manifest something, relocate your consciousness to the place in which the thing you want has already come true.– Frederick Dodson, Reality Creation and Manifestation

This 700 page Book is a complete compendium on the Reality Creation Teachings and organizes hundreds of articles and research papers written over the past 20 years. Use this as a guide and training manual on reality creating, the law of attraction, manifesting, consciousness and achieving your dreams and goals through the power of focus, imagination, emotion, belief and action.

Reviews of Reality Creation and Manifestation

Best of its Kind

I’ve been looking for best practical content for mind mastery and this was my first Frederick Dodson material. I love how he dissects everything and reveals the truth about LOA you’re what you think, and mostly radiate. I am a fan from now on

The most richly filled book on Manifesting

This book is abundantly filled with rich and inspiring information on every possible aspect of the “thoughts create reality” idea. The author has obviously studied this stuff his entire life as it contains nuggets of information not read anywhere else. If you are bored by the usual “law of attraction” stuff out there and want a deeper understanding of it all, get this. I`m halfway through the book and my life has already upgraded a couple of levels.

Practical Advice for Creating the Life You Desire

I love Fred’s straight forward approach to reality creation and manifestation. This is an in depth look at various techniques designed to empower the reader in a way that will help them to create the life of their choosing. It does an excellent job of separating the fluff of wishful thinking from the useful information that you can use to directly influence your reality. If you are looking for something that works rather than simply sells “secrets” then this is certainly a book I would recommend. Excellent stuff Frederick. You’re helping me to change my life!

Your Experience of Life is created by who you believe you are and all the thoughts, words and actions that go along with your self-image. The massive 702-page book “Reality Creation and Manifestation” by Consciousness-Researcher and Success Coach Frederick Dodson teaches you more than any other book on how “the law of attraction”, “manifesting” and “reality creating” really work.

Excerpts from the Audiobook

1. A Course in Reality Manifesting

7. The Power of Intention

9. The Law of Attraction Refined

An excerpt from Chapter 2 “Imagination and Reality”

The power of scripting

One of my favorite and most effective reality-creation techniques of the last two years has been “scripting” (the term “scripting” originates with the law-of-attraction teacher Abraham-Hicks). My personal version of the technique, which somewhat differs from others, works like this:

You write about or “script” a scene from your desired end-result or wish-fulfilled, in the past-tense (as if it has already happened). You write until you feel much better about whatever it is you were thinking of. “Scripting” is essentially written Imagination. It’s purpose is to improve your emotional state in the now and to modulate your thoughts to become more magnetic to experience you’d prefer. You can script anything you would like to experience and by doing so, you will start to draw that experience into your reality. I will usually write on a topic I want to create for ten to fifteen minutes a day and I will do so until it manifests or is obviously in the process of manifesting. The main idea is to relocate your consciousness to the place in which the thing you want has already come true.

If you would like to have a certain amount of money, you might write a scene from your dream-job or about signing a special deal or about purchasing specific things or you might describe your new house or state of being when you have that money. If you would like to have a certain conversation-outcome with a person, you would script that conversation in detail and the way you want it (in the case of scripting conversations or desired emails, using the present-tense instead of the past-tense is better because it more clearly reflects what the manifest reality will sound like). If you want a specific relationship you would write out in detail scenes from that relationship. If you want improved health, you would describe your life and body in a state of perfect health.

The more detail you put into your script, the more you feel its reality. You should script on it every day until its easy for you to think and feel in those new terms.

Some people ask me how long it takes before something manifests in this way. But it doesn’t really matter that much how long it takes if you understand that once you get into the emotional state and the mood of the “wish already manifest”, such questions don’t matter. Some things have taken only one or two scripting sessions. My longest scripting session took 7 months! It was a rather difficult reality to manifest, so I wrote about it for 7 months almost every day (taking a few days of break now and then), until it began to materialize in my life. If you enjoy the process of shifting your emotions and training your imagination itself, then the question of “how long it takes” does not really arise.Being bothered that something is “not yet manifest” merely indicates that you have more writing to do because you are not yet properly aligned with the wish fulfilled. Your faith in the reality you want to create may wane and fall sometimes throughout the process but that again is just an indicator to do some more writing on it. A true reality-creator sticks with the process until what he is focusing on comes true.

Some people have asked me whether there should be a “letting go” phase during the scripting process. My experience has been, that the “letting go” part arises naturally as a consequence of you being FULL of whatever it is you focused on. You feel a reality so very manifest and real, that you no longer feel the need to focus on it that much. In other words, if you already had the “Million Dollars” and truly felt that, you would no longer be focusing that hard. Scripting should be done in a playful, non-rigid manner. The state of the “wish already fulfilled” is light, not rigid and over-focused. Moreover, if you script on a goal for 15 minutes a day, the rest of the day already constitutes the “letting go” part of manifesting. While writing you totally immerse yourself into the end-result. For the rest of the day you let go.

There really is no limit to how long you can or should script. Use slight exaggeration in your script so that you can actually feel the joy you would be feeling if the scene were already true. Do not exaggerate so much that your subconscious will not believe these new thoughts, but just enough to feel more. Initially you may not feel that much or you

And if all that is not enough for you, then there is…