The hidden meaning and symbolism of Pharmaceuticals 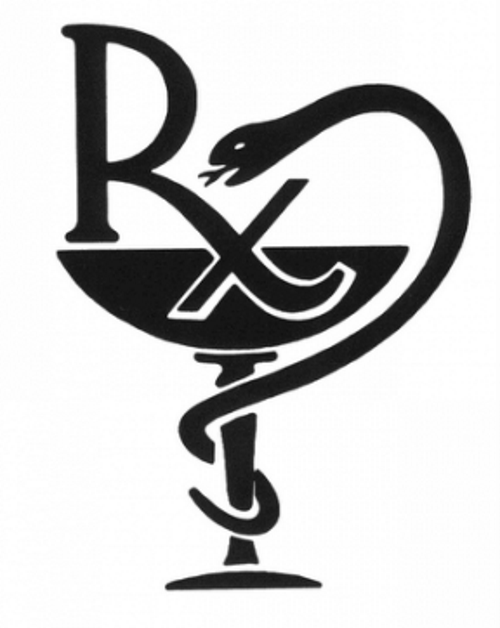 This is a follow-up to my article “The deeper meaning and vibration of brand names“.

Words and Symbols have evocative power, chosen consciously or subconsciously to transport ideas. The pharmaceutical and medical industries have chosen interesting words and symbols to represent their trade.

In ancient Greece a “Pharmakos” was a person assigned for ritual sacrifice, a human scapegoat, seen as valueless trash.

For example, ancient Athens had an annual summer festival where the Pharmakos were the expiatory offerings. “Expiatory” means they were used to atone for mass sins. This comes from the ancient belief that a person’s sins can be transferred to another being. According to that belief you can do all the misdeeds you like and then transfer your bad vibe to someone else who is sacrificed in your stead (the extreme opposite of personal responsibility). Traditionally this was done with a goat. The person’s sins were transferred to the goat, then the goat is rolled down a mountain to die. From this practice we get the term “scapegoat”. A Pharmakos is a human scapegoat. The dignity of a Pharmakos was so utterly lost that their execution was public spectacle and entertainment.  Before being killed they were physically and mentally tortured and abused, for all to see.

It makes you wonder, doesn’t it. Why would the medical profession choose the word “pharmacy” and “pharmaceuticals” to sell their goods? Could they have chosen a word-meaning any more destitute?

In some languages the word narkos (as in narcotics) is used in connection with medicine and is also the word for anesthesia. The Greek word narkos is defined as “unconsciousness, sleep, stupor and death“. There’s nothing about healing, regeneration, joy or life in either of these words.

According to a description on the cdc.gov website, the word Influenza can be traced back to 15th Century Italy. In those days, epidemics and pandemics were attributed to the influence of the stars. The “first recorded global pandemic” was supposedly in 1580.

My point? I’ll get to that in a moment.

To medieval alchemists, the most important Planet was Saturn. It was referred to as “the beginning of matter”, because it was seen as the entry-point or beginning of the physical realm. The ruler of the “revealed realm” (physical world), who ruled over the “seven dwellings” (planets) was seated there, bringing justice and reason to humankind. But this ruler was said to have broken the cosmic order by revealing divine secrets to humans who weren’t ready for them. For this, he was punished. His punishment was to be imprisoned in this realm. Ever since then, Saturn he has been quite angry at the Creator. Saturn is traditionally associated with Promotheus of Greek Mythology and with the Serpent of the Abrahamic tradition.

This is why the symbol of modern medicine is the serpent:

Alchemists viewed Saturn as a source of healing. The cipher for Saturn was Rx. The medieval alchemists wrote Rx on a piece of paper and prescribed it as a cure. Rx was the “Sigil of Saturn”. A Sigil is a magical symbol that is supposed to bring about a manifestation. A Sigil is a shorthand or obscured symbol containing larger pieces of information. The patients were sometimes instructed to eat the piece of paper with the Sigil of Saturn, which the alchemists had imprinted with their magical intent. Amazingly, today the initials Rx are still written on almost every prescription a doctor makes (today it’s claimed to mean “Prescription” coming from an old word for “Recipe”).

My point? The pharmaceutical and medical “industry” have spent Trillions of Dollars for lawsuits and media fighting natural cures and healing. They call natural healers “quacks” who peddle “superstition” and “pseudo-science”. But having now taken a deeper look at their words and symbols, they look a little like quacks to me, more like occultists than scientists.

Pharmacies follow a long lineage of “magic potions” that we read about in fairy tales. Magic potions were supposed to have special powers, such as love potions to create romantic attraction, potions to heal, to get rich and even those promising immortality. There are many old stories of potion-sellers as quacks and snake-oil-salesmen. Potions could be bought in an apothecary (old word for pharmacy), from prostitutes, from enchanters or at carnivals. The word “potion” is said to come from the Spanish word pocion, which means poison. It’s this same tradition that today sells pills.

Image Below: “The Traveling Quack”, an illustration from the 1800s. The definition of the Latin word Pharmakeia is (bolding mine) a healing or harmful medicine, a healing or poisonous herb; a drug, poisonous potion; magic potion, dye, raw material for physical or chemical processing, often associated with sorcery, magic and idolatry.

Who are these people to call alternative healers “quacks”?

I’ve been a pharma-skeptic all my life and try to limit my use. I’ve taken advantage of local anesthesia at the dentist and thank Pharma for that! (but I’m suspicious of full anesthesia for spiritual reasons). I’ve had my share of Ibuprofen and Aspirin throughout life and am also grateful for those (but more recently, I use the methods described in my book You can heal anyone, they work quite well and don’t require weird spells and symbols).

My skepticism of the industry only grew in the last few years. For example: They have no vax for HIV after 40 years of research, but for “Covid”, several companies have vaccines after just a few weeks! That’s a real head-scratcher.

Another example: In the last years we’ve seen endless supposed “leaks” where our politicians wear masks because “it’s the science” as recommended by the pharma industry. But as soon as the cameras go off, they take them off.

This points toward politicians being bullied to wear them on camera, but not actually believing in what they are telling people. Who is doing the pressuring? More often than not, it’s one or several of the lawyers, agents and PR-people of the big pharma companies.

I don’t like what becomes of people who use pharmaceuticals long-term. I’ve seen more bad than good. Rates of anxiety and depression have not decreased with the rise of anti-depressants, just the opposite. If pharmaceuticals have genuinely helped you with something, that’s great. There are people who report remarkable success with them. But I think it’s important we make a distinction between illness suppression vs. genuine healing. Too often, pharmaceuticals serve as suppressants when real healing can only be found at an emotional or energetic level. An act of forgiveness, the release of a grudge, the correction of a lifestyle – either of these things can cause greater positive change than the magic pill.

One of the myths of “modern pharma” is that it’s modern. Is it really? Let’s take the most famous pharma product, Aspirin. I looked it up while writing this and found that it’s been around for a long time. I had a hunch that it it’s not a modern invention. In 1757 the philosopher Reverend Stone chewed on the bark of a willow tree to get relief, just like Hippocrates a thousand years before him. Willow bark contains the active ingredient of Aspirin, salicin. This stuff is for free, all around in nature!

Scientism believes there are “germs” and “viruses” floating around that make you sick. The belief is used as a political tool. It misdirects responsibility for your health onto others, just like the misdeeds of one person are redirected to the ancient Pharmakos. You are no longer responsible for your well-being, instead you get sick “out of the blue” because you are “in contact” with someone else. This belief-system objectifies humans as carriers of illnesses. If you can get a person to believe they are not responsible for their reality, political dictatorship becomes possible. Among mentally sound people the motto is “healthy until proven sick”. But recent years have seen the promotion of the word “asymptomatic”, as if someone could be sick without knowing it. Thus anyone can be declared “sick” without evidence. With this concept “modern science” is coming awfully close to complete quackery. They are saying “Well, we don’t have any evidence that this person is sick. She looks and acts entirely healthy. But we know better – trust us, she’s sick and needs our pills and jabs every couple of months”. Declaring someone who is fit and healthy “sick” is more of a black magic curse than it is “science”. Fortunately their spell doesn’t work if you don’t believe it.

If sickness does not come from these “germs” floating around in the air, where does it come from? In my view, sickness comes from psychological and emotional trauma, stress and fear. I generally don’t get sick, no matter what, because I do not emotionally resonate with illness. Negative emotions are the primary cause of illness. You can heal yourself! Maybe you’ve heard: Some doctors who promote this idea, get bullied by pharma companies. Could there be anything more unscientific than bullying a person who holds alternative views?

A secondary cause sickness is lack of nutrients and vitamins, toxins in polluted water, in processed foods, in vaccines, in pesticides and unhealthy types of radiation. Sickness is the body trying to restore itself. The self-healing capabilities of the body are vastly superior some of these “magic potions”.

Do people generally look more healthy than the majority of people today? Are faces more defined, statures more upright, skin more clear and muscles bigger? Are they slimmer? Why do dug out skeletons of our ancestors also reveal bigger head sizes, bigger and stronger jaws, stronger teeth and much more sturdy skeletal structures? Let me have a wild guess: Our sedentary, screen-sitting and over-medicated lifestyle might have something to do with it! People looked, sounded and felt healthier and stronger before all this “modern healthcare” came along! And yet, we are told that today we have eradicated many illnesses thanks to “modern science” and that we’re more “advanced” than our “primitive” ancestors. You can even see the difference just between the 1970s and 1990s. At least at a physical level, we were fitter. The state of our body has declined. In 2022 world obesity rates were at an all-time-high.

Our “primitive” ancestors didn’t only look healthier, they also knew how things work. A person two hundred years ago was more likely to know how to build a boat, built a house, farm animals, grow food, sew clothing – things that the “advanced” person of today does not know how to do. 99% of the people alive today would not know how to re-create most of our “scientific progress”. Do you know how to build a television? A radio? A computer? An airplane? A car? A submarine? How to lay cables? How to build a skyscraper? If you don’t know how to do any of this, how can you consider yourself “advanced” and “modern”? In many ways, we are more primitive than the people one and two centuries ago. At least they knew how to live self-sufficiently!

A “science based” education system that does not teach the people how to do anything is useless. Science is the pursuit of knowledge but only knowledge that you can personally apply is empowering.

Modern medicine has done a lot of good. I’m thankful that my teeth are operated on with precision lenses, needles and anesthesia. I’m glad that surgery is performed by trained and licensed surgeons. But there’s something not quite right about one aspect of modern medicine: the pharma industry and it’s fight against natural remedies and self-healing. That’s something that deserves closer inspection.