Is there an Over-soul that occupies several bodies across the world?

“I met a lady at work, she reminds me of a woman I know in Singapore. She looks just like her, except one is European, the other is Asian. It’s uncanny. They have the same look and the same protuding teeth. They make the same gestures, both circle their fingers upwards when they talk. It’s like I am looking at the Asian version of her. They even share similar opinions!”

Haven’t we all experienced this? There are just people, that look and sound like they come from the same prototype. If humans were manufactured, one would say that these are from the same factory. Our current models of reality don’t provide an explanation for it. The phenomenon is not limited to those genetically related, it occurs across ethnicity. One person might look, sound and act more similar to someone on the other side of the world than to their own family members. But Why? How?

Described in detail in my 2006  book “Parallel Universes of Self“, the idea that several Souls are grouped into one Oversoul. Imagine the fingers as different souls but the hand as one Oversoul. From this perspective, it could be that people who have a similar unique character across different families and countries are of the same Oversoul that is incarnate in different places. While evidence or references for this theory are hard to come by, it would also explain the experience of oneself existing in different parallel lives or in different times.

The idea that there are a limited amount of archetypal Souls or genetic-makes that are re-used. For instance, there might be one Million types of people multiplied over a population of 7 Billion. We can see this in the animal kingdom. For example, there can be an unlimited number of cats, but a limited number of cat-types or an unlimited number of birds, but only a certain amount of bird types. And so,  “near duplicates” are found across different areas. This theory could also be true in combination with the Oversoul Theory. In that case, the Oversoul would be the Archetype for a certain genetic lineage. Another idea is that body-types are limited, souls unlimited. That would mean that each soul is unique, but the body type is not that unique.

This is the idea that, as I meet different people, I am projecting qualities onto them, that remind me of an original imprint I received or imagined. The people are not like I see them, I am making them that way through my projection. I am seeing a similarity between the lady from Singapore, and the American lady that others are not necessarily seeing. And perhaps I keep attracting similar people into my life, due to who I am. And if I am attracting them, then this theory could be true in combination with the Archetype Theory and the Oversoul Theory. Another idea that comes to mind, is that peoples bodies are structured in a similar way if they have a similar life-path.

The most mundane explanation is that the two lookalikes merely have common ancestry. That’s a possibility, but it fails to explain matches across ethnicity and country and it also doesn’t explain how some of these match-ups share mental attitudes, especially considering that real identical twins often do not share opinions.

Is any of these theories accurate? I don’t know, I simply enjoy deep thought.  The question remains to be researched. Fortunately, Internet has allowed many lookalikes to meet up. Some look like identical twins, some are merely of similar “type”. I’ve taken these examples from the Internet, where people have posted many Millions of pictures of meet ups between them and their lookalikes (these are often called their “Doppelgangers”, but I believe the Doppelganger phenomenon to be something different, as previously written). 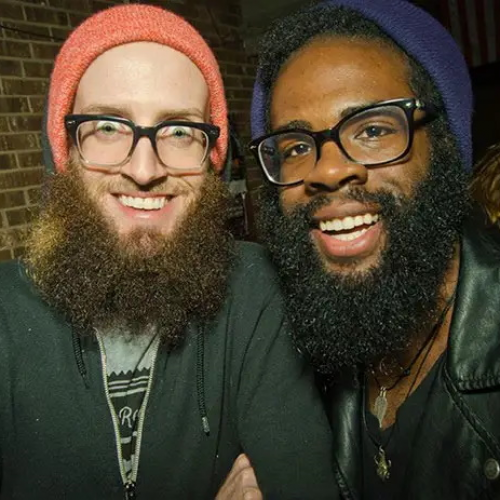 A few well-known lookalikes across ethnicity:

I myself keep coming across certain”typical” people, regardless of which company, town, village, city or community I visit. Of course it’s an error to expect the same behavior from a new person as another you know that looks similar. You might think “He reminds me of X” and therefore expect him to be just like X. And sometimes character traits really do match, where you think “I knew he/she would be like that! That’s just TYPICAL!”. The word “typical” itself, means there are certain identifiable TYPES of people. But at other times they don’t match and matter how much he reminds you have your deceased friend, he isn’t. No matter how much she looks like your ex-girlfriend, she isn’t. Whether they share an Oversoul or have a life path in common or share certain talents is not known to me. There would have to be a gigantic scientific study that invites thousands of lookalikes, to determine that.

This function has been disabled for Reality Creation.