Humans as Electric Circuits and Batteries “I’m a man of science. I don’t believe that we are energy” someone told me. In response, I sent him the Wikipedia page on Electrophysiology, for starters. There we read:

Electrophysiology is the branch of physiology that studies the electrical properties of biological cells and tissues. It involves measurements of voltage changes or electric current or manipulations on a wide variety of scales from single ion channel proteins to whole organs like the heart. In neuroscience, it includes measurements of the electrical activity of neurons, and, in particular, action potential activity. Recordings of large-scale electric signals from the nervous system, such as electroencephalography, may also be referred to as electrophysiological recordings. They are useful for electrodiagnosis and monitoring.

After sending him this, I asked him if he still doesn’t believe that humans are energy. But he saw no relation between spiritual-teachings around energy and the fact that the body is electric.

Incidentally, that same person also said “I don’t believe in crystals and all this mumbo-jumbo.”
I’m not really into crystal stuff either, but it inspired me to compile a few snippets from various news-articles: Crystals are important for everything from semiconductors as used in computers to LED lights. Nothing to do with “mumbo jumbo”. When people talk about crystals or humans having to do with “energy” they are intuiting scientific facts.

The strict separation between “science” and “spirituality” is unnecessary as both point to the same realities.

I found this image online a few weeks ago. It shows human beings as potential electric circuits. The image further above is from the 1999 movie “The Matrix”. In one of the most iconic movie scenes of all time the main character, Morpheus says that there is an agenda to harvest the energy of humans as if they were a battery. What if that were true?

In one of my videos I’ve pointed out the amazing linguistic coincidences around batteries, cells and electricity. I asked whether it’s a coincidence that the body is made up of cells, just like a battery. Language provides amazing clues to hidden realities for anyone who cares to look more closely. When you take up a leadership position, you are put in charge. But when you fail to recharge, you’re no longer in charge. Being energy depleted, you might become erratic and be charged with battery and locked up in a prison cell. You’ll be lucky if the let you keep your cell phone. Oh, and speaking of cells, have you ever wondered why removing the software limitations of a smartphone is called Jailbreaking? I didn’t know my cell phone was a jail.

Do you really think all these meanings around cells and charging are a coincidence? Or do they point to deeper meanings? If our body-mind-system is an electric circuit and battery can it be harvested by others? And if so, can I prevent that and not only keep but increase my energy? I believe so. Why do you think almost all my books and guided-audio-meditations are around the topic of energy, energy levels and increasing energy? It’s because all else – happiness, health, money, well-being are linked to energy. When energy and attention are low and depleted it leads to a lack of these things. When you are full of energy it leads to an abundance of these things.

Your cells are not the only part of your body that are electrically charged. Your body is full of “Electrolytes”, which are defined as follows:

“Electrolytes are minerals in your blood and other body fluids that carry an electric charge. Electrolytes affect how your body functions in many ways, including: The amount of water in your body. The acidity of your blood (pH) Your muscle function”

“Electroceuticals are a new category of therapeutic agents which act by targeting the neural circuits of organs. The therapy involves mapping the neural circuitry and delivering neural impulses to these specific targets. The impulse is administered via an implantable device”.

If the human body is actually an electric circuit, many things would be seen in a new light – sexuality, acupuncture, computers and thousands of other things gain a new meaning. What really happens during sex? What kind of electrical discharge occurs with the Orgasm? To which extent are energies between humans exchanged? To which extent is energy between my electric fingers and my laptop exchanged? What does acupuncture really do to my circuitry?

Going even further: If the human body is one circuit, are communities and cities larger ones? There was a time, around 120 years ago, when science still openly included the discussion of consciousness and energy. 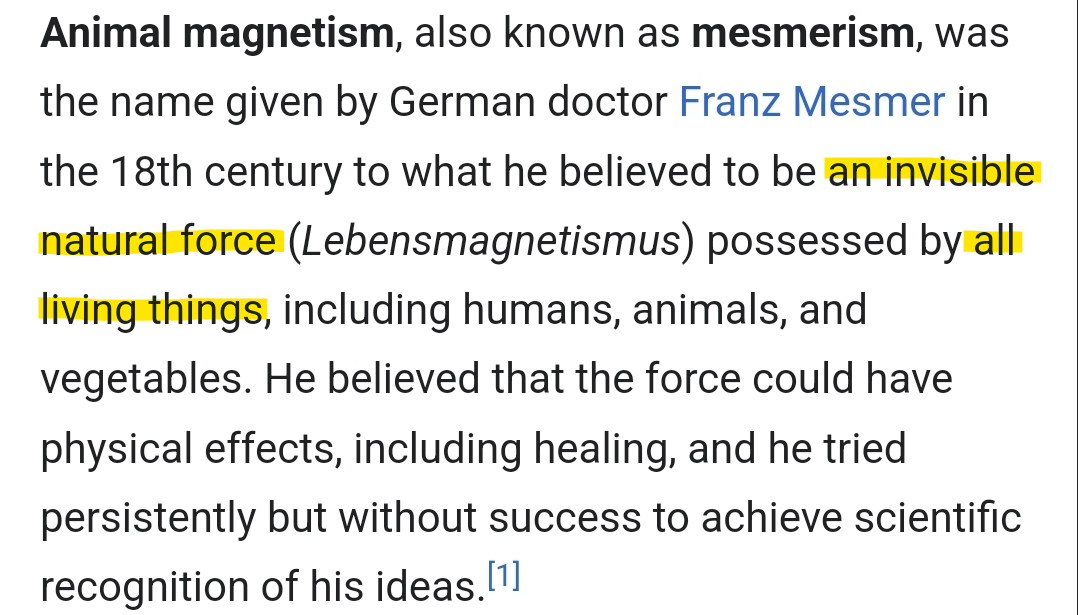 The reality of a life force and a soul were given many different names in those days. For example: 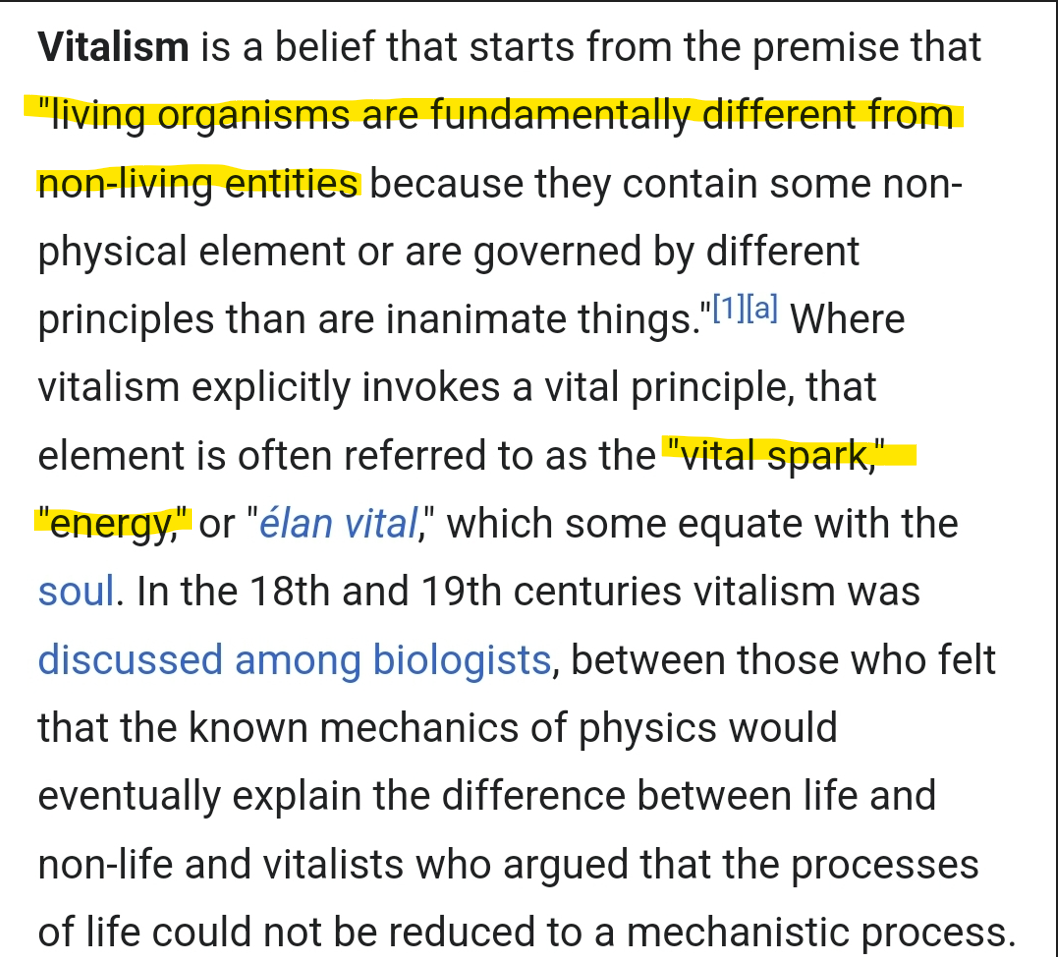 What happened? Materialism happened. Anything related to consciousness, energy, spirituality, ancient wisdom or even eastern medicine was removed from academic discourse. Well, I can’t say it was removed. It’s all still there, but in a roundabout, obscured way. For example “Quantum Physics” is essentially the discussion of spiritual phenomena using scientific sounding vocabulary.

If I say “we are energy”, they will say “na, that’s pseudo-science!”. At the same time, they’ll refer to the nervous system as “circuitry” and cells as “electric”.

I recently shared on my social media a very obvious example of this kind of obscuring, an article titled  Water companies use dowsing rods to find water pipes. The article says that…

“Most of the major water companies in the United Kingdom use dowsing rods — a folk magic practice discredited by science — to find underwater pipes, according to an Oxford Ph.D. student and science video producer who accidentally discovered the practice is still in use”.

Wikipedia assures us that dowsing is a “pseudoscience” with no basis in reality. Why then do the major water and piping companies use it? Would a multi-billion-dollar industry rely on something that was “discredited by science”? Of course not. Big Business uses whatever works. So who is doing the “discrediting”? When they say it’s discredited “by science”, what kind of science is that? Is not effectiveness the measure of truth?

This small example reveals something interesting about the world in general:

The public is told one thing, the people at the top practice another thing.

The practice of dowsing is only possible, by the way, if the human body is seen as a feeling and intuiting field of energy. Dowsing rods are a mere extension of your ability to feel energy and water-sources.

Knowledge of the body-as-electricity is tucked away in many fields. I’ve already mentioned “Electrophysiology”. Another is called Cybernetics. Cybernetics is defined as “the science of communications and automatic control systems in both machines and living things“. Yes, there is a whole science that compares humans to machinery and circuitry.

There are also sciences that are involved in trying to control living beings via electronic methods. For example a field called Biotelemetry. Quoting from the Wikipedia page:

Biotelemetry is increasingly being used to understand animals and wildlife by remotely measuring physiology, behaviour and energetic status. It can be used to understand the way that animals migrate, and also the environment that they are experiencing by measuring the abiotic variables, and how it is affecting their physiological status by measuring biotic variables such as heart rate and temperature. Telemetry systems can either be attached externally to animals, or placed internally, with the types of transmission for the devices dependent on the environment that the animal moves in. For example, to study the movement of swimming animals signals using radio transmission or ultrasonic transmission are often used but land based or flying animals can be tracked with GPS and satellite transmissions.

Did you catch that? They are measuring an animals energetic status.

Quoting from the page on Wildlife Radiotelemetry:

Wildlife radio telemetry is a tool used to track the movement and behavior of animals. This technique uses the transmission of radio signals to locate a transmitter attached to the animal of interest. It is often used to obtain location data on the animal’s preferred habitat, home range, and to understand population dynamics. The different types of radio telemetry techniques include very high frequency (VHF) transmitters, global positioning system (GPS) tracking, and satellite tracking. Recent advances in technology have improved radio telemetry techniques by increasing the efficacy of data collection.

If we are in fact electricity, what consequences will it have to insert electronic technology into our bodies, as told of in these two recent news snippets: If I were an electric circuit, the best way to harvest my energy would presumably be to stick devices into me. I personally believe this is already happening on a spiritual level to some extent with entities (parasites of the astral realm).

That’s why I am no big fan of Transhumanism. Many people today are already in a state of stupor, behaving like robots. There are billions of people walking around without any form of introspection or contemplation, self-observation or meditation. They are preoccupied with work, food and entertainment and little else. Before we start talking about inserting gadgets into our skin, maybe we ought to find out a little more about who we are.

Some people say that our cell functions can be remote controlled through radiofrequency waves. Another idea says that you first have to ingest or be injected with certain nanoparticles and that these miniature devices can than be excited through targeted radiofrequencies. Thus, in the last year you’ve had many conspiracy-theories arise that claim that Covid-19 was created by 5G cell-phone-towers that interact with nanoparticles that were injected through vaccines. This is the reason, they say, instances of Covid skyrocketed after vaccines and their boosters were mass administered. I don’t know if any of this is even remotely true. I am, by nature, skeptical of any claims of external control (My Reality Creation teachings are all about internal control). But there is no doubt that there are some people (and entities) that attempt to weaken human beings to such an extreme degree that some external control becomes possible.

Electric, magnetic and electromagnetic components are not only native to human beings but to other species too, perhaps to all living things. Another news snippet: If I am an electric circuit, how does all the electricity around me affect me? And does my Wi-Fi affect me? I’ve experimented a lot with this. I turn off Wi-fi and Mobile Data at night for better sleep. I am sensitive enough to feel when there is a Wi-Fi device on nearby. There is no question or doubt of whether it’s turned off or on. When it’s on, I feel it as a sort of “tension in the air” for lack of better words. It’s not that it’s necessarily “bad”, but it keeps emitting the same frequency all day. Your divinely created, awesome soul-mind-body can pick up on this.

I’ve also experimented with turning off the main electricity switch. I still do it some times. I’ve noticed an obvious difference. Even if I turn off all lights and appliances, powering off the main switch still feels even more relieving. Maybe you’ve felt this strange sense of relief before when there was a power-outage in your area.

I don’t mean to induce paranoia about electricity and frequencies here. In my home, both are on most of the time. I mean to reawaken in you a sensitivity toward all the energies and frequencies buzzing around you. This sensitivity is connected to who you really are. You are an electric and magnetic being and can experience yourself as such. Getting to know yourself in this way, adds a new self-awareness to your life.