On the double-meanings of words 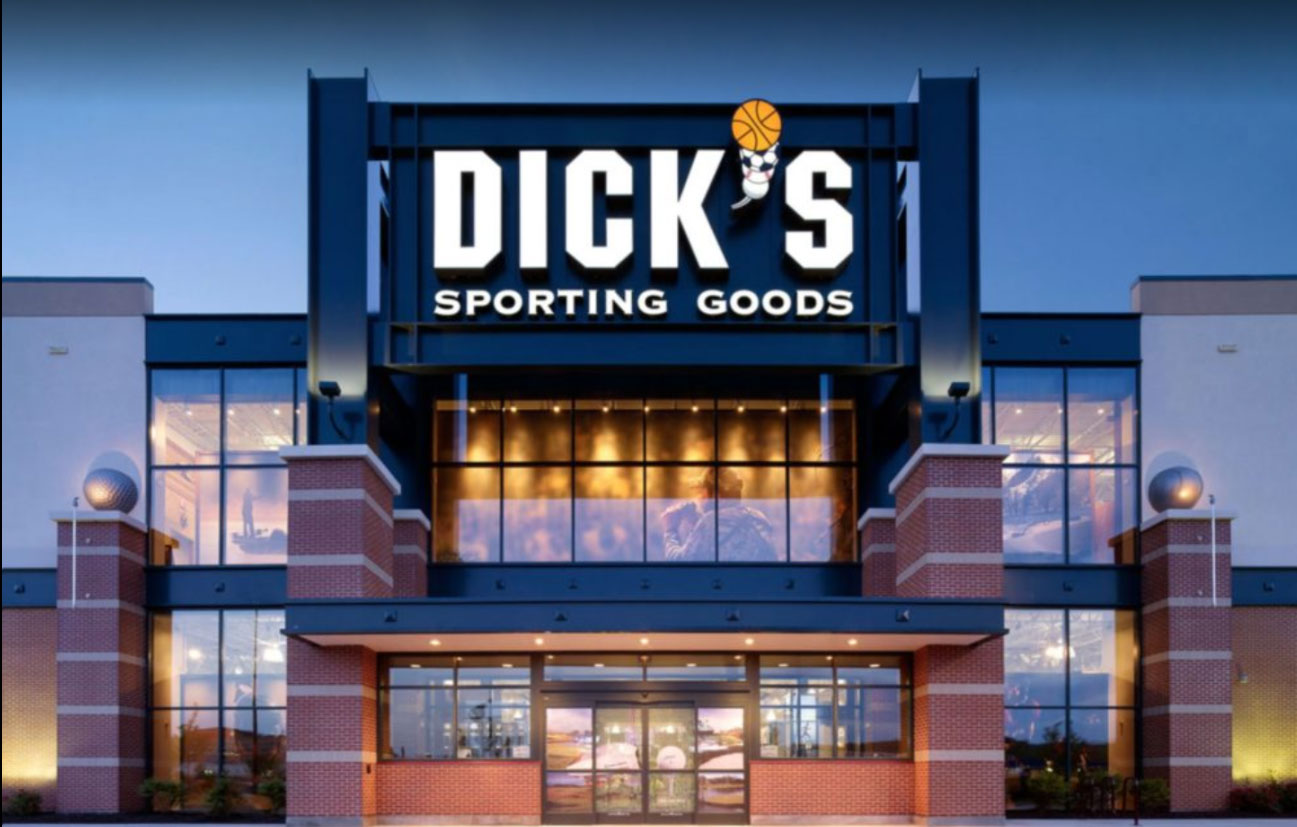 When I play Tennis, I’m doing so on a court, holding a racket. Spectators sit on a bench. If I’m accused of running a racket, I soon find myself in court and am judged by a jury sitting on the bench.

I enjoy double-meanings, especially when they accumulate. In my Video Course Your Electric Word I teach that words carry creative and destructive energy and that each word and sound has a particular vibration and effect on reality. Thus, when I say “hello” it’s the same sound as saying “hell low”. I’d prefer to say “Hi” instead, because it’s the same sound-vibration as “high”.

To the annoyance of friends and family, I enjoy puns and wordplay. I was wondering why the ball was getting bigger, then it hit me. I believe vegetarianism is one big missed steak. To whoever invented zero: Thanks for nothing. Being cremated is some peoples’ last chance for a smoking hot body. Waking up this morning was an eye-opening experience.

I doubt it’s a coincidence that the word spelling itself has a double meaning. 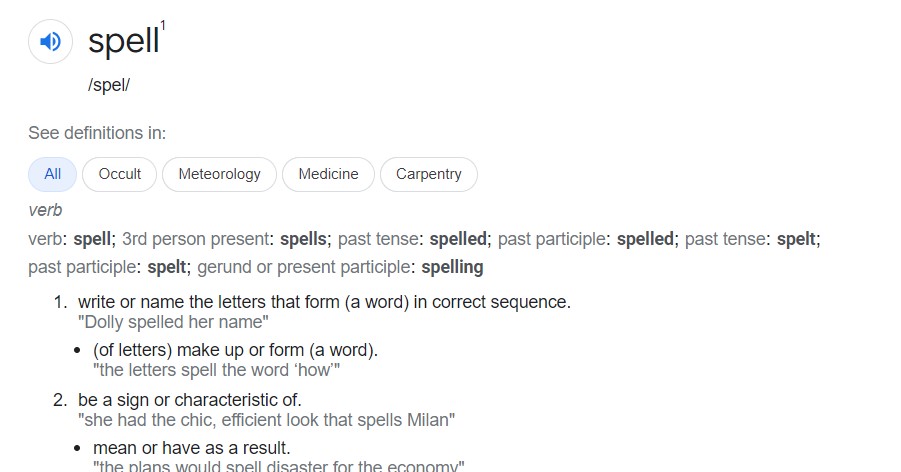 Spelling means writing or speaking the letters of a word (word-creation) or casting a magic charm or incantation. In both definitions, the word points to reality creation.

Death and life are in the power of the tongue.

The negative use of word-power is to cast a spell, to say words that influence another person negatively. As said in my book Clearing Entities, it was common among ancient people to cast spells that were supposed to put opponents to death just by the spoken word. But elaborate rituals aren’t even required: Just saying to someone “You look sick today, is something wrong with you?” can cause a susceptible person to get sick on that day. According to studies on hypnosis, around 20% of the population are highly suggestible and receptive to hypnotic commands. I recommend that any negative communication from anyone, including people you love, first pass through your skepticism filter.

Recently I arrived at Denver airport late at night and inquired about rental cars. The rental-car official said to me: “There are no rental cars in the whole city. It’s December. You won’t find any rental cars at all. Not a chance“. He underlined his words with extravagant gestures, crossing his arms while saying “no cars AT ALL!”. Certain hand gestures can be combined with a specific statement to give it more energy. Most people do this unconsciously but it can be done intentionally. He was unconsciously casting a spell. I thought: “What is the likelihood of there being no car in the entire city? What nonsense!” That thought was enough to dispel his incantation.

Did you catch that word in the last sentence? Dispel = Dis-Spell, to remove the spell.

I found a car easily and I got to choose among hundreds of available cars. Earlier, I was told by United Airlines that a flight was delayed due to ice on the runway and I’d miss the connecting flight (imagine being in Business for half a century and still being unprepared for ice in December). A staffer weaved the magic wand of her arms while saying “You’re not going to be catching your connecting flight and there is no other connecting flight today”. Again, it was recognized as an attempted spell – negative reality creation. I said “I’ll be just fine”. And I was, making it to my destination on time.

Do you understand it’s not up to others to define your results? No matter how much “authority” they appear to have. In my experience, most people don’t have the slightest clue who they are, what reality is or what they’re talking about. So why take their negative warnings seriously? Within only one day I had been told that I won’t catch a flight nor get a rental car, both of which turned out to be untrue. Had I bought into these thoughts, who knows what would have happened. Thoughts are vibrations. They travel to form your experience ahead of time. Then you step into them and experience the consequence of your thoughts. The thought I sent out was “I’ll be just fine” and so I was just fine. Even if I had missed the connecting flight, I’d have been just fine. I don’t need to adopt the stress of the speaker.

Broadcasting is called so because it casts a broad spell. When you audition for a role it’s also called casting because you undergo a change in identity, you are put into a new cast. 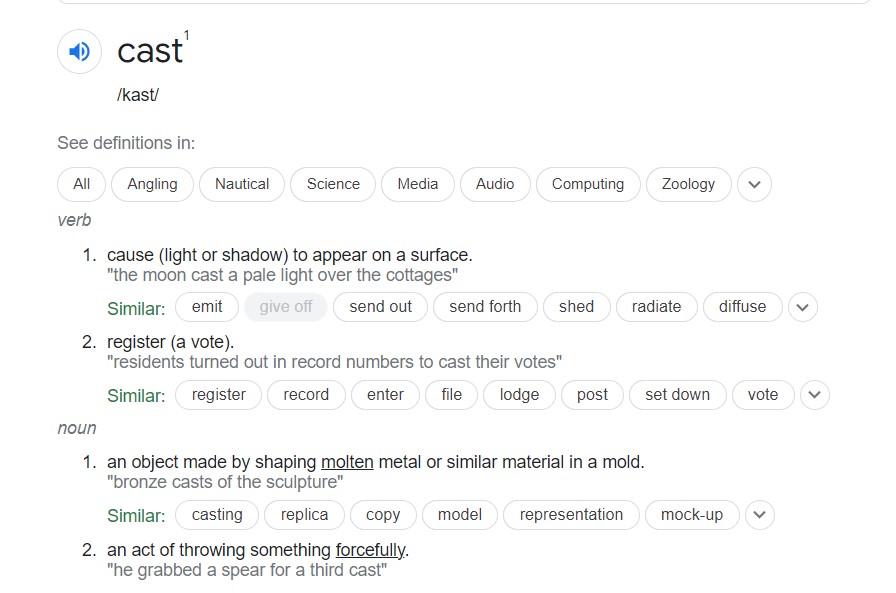 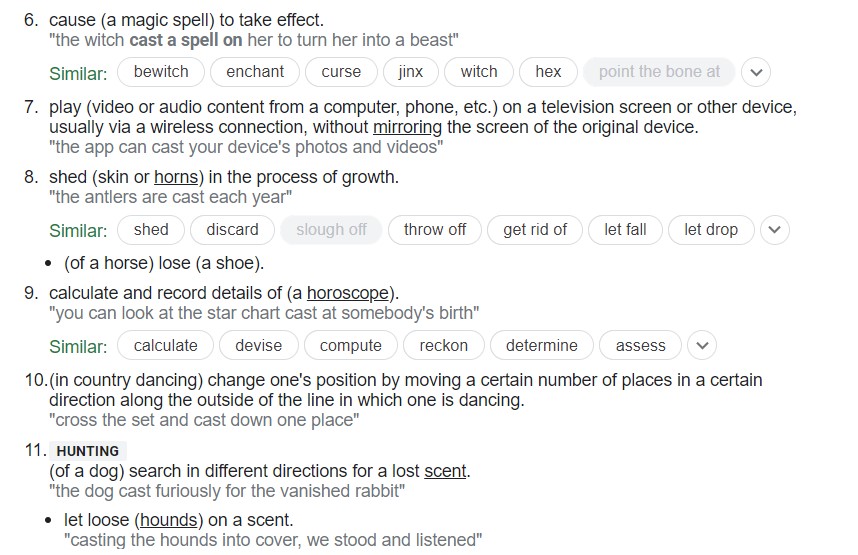 Cast means “to cause a magic spell to take effect”, “to play video or audio content” and to create an object by shaping molten metal in a mold so that it goes from liquid to dense. It also means “to cause light or shadow to appear on a surface“.  Realize that each of these definitions are different methods of reality creation. (FTR I’m not fond of the word podcast because I prefer not to live in a pod).

Television sounds like Tell-a-Vision and indeed involves others telling you what to envision. It’s the opposite of self-determined creation from your imagination. That’s not a bad thing if you know and trust the person telling-you-a-vision. But we’ve created a society where the Screen has supplanted the power of thought in most people. The average living room today, where a family gets together, has as it’s centerpiece a Television screen. If time travelers from the past were to show up here, they’d be saying “The people of the future are strange. Everyone sits around and worships an image instead of looking at each other“.

The word Media is the plural of Medium – a channeler of information. 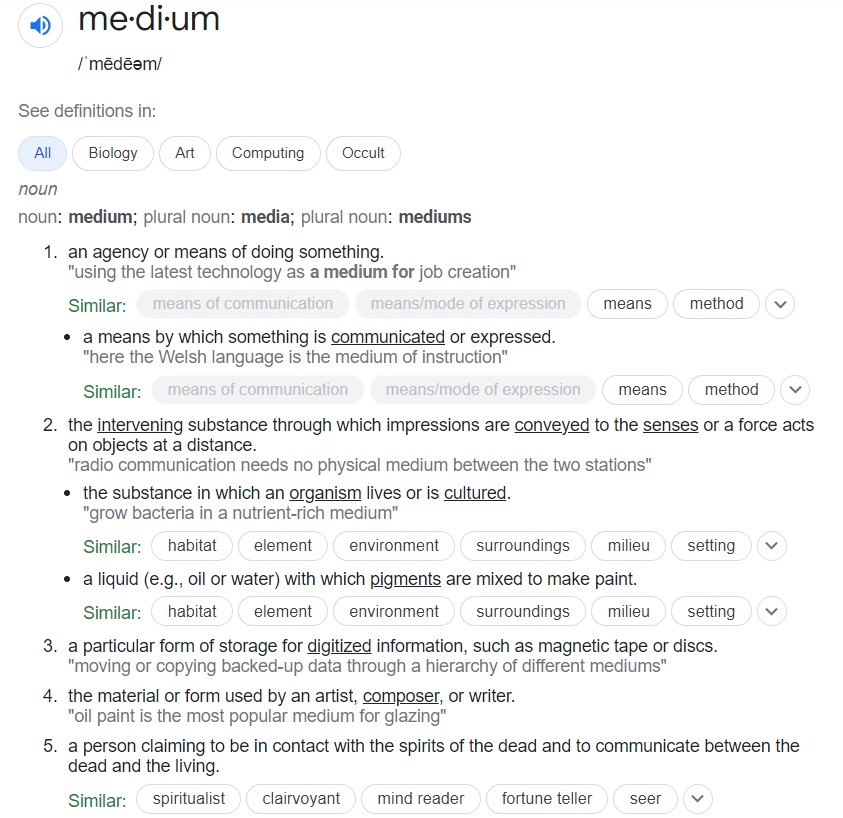 It’s no coincidence so many media-related words also have double meanings in occultism and magic. Mass-media is a kind of spell-casting hypnotic stage-magic. Thus, “the media” had the power to cast a Covid-spell, making most people believe that the seasonal flu is actually a dangerous pandemic. With the help of “the media” the gullible can be made to believe anything. This is why any well-intended real education would teach about reality creation, belief-creation, influence, the subconscious and hypnosis.

According to books published between the 1600s and 1800s, the word “news” is not only new things but was said to be an abbreviation of “north, east, west and south”. This derives from the occult practice of “calling the spirits” from all directions or broad-casting a spell in all directions. The word radio has the same root as radius which in Latin means “beam”. Radius also refers to a straight line from the center to the circumference of a circle or sphere. Thus, radio broad-casts its spells around the whole Earth.

The Inter-net and World Wide Web both use the words of spiders (spy-ders) setting a trap. Thus, the bots are “crawling” the web. My point? I’ve been slightly skeptical of the Internet from day one, merely based on the words used. I’ll use it and enjoy it but will always also take breaks as not to get too tied up in the web. I let the meaning-of-words influence my life decisions. Words have meaning and sometimes double-meaning. Their meaning is an imprint. It’s not that I go overboard with this and analyze every single word that comes my way. But I’m at least somewhat sensitive to what words mean and that has helped me a lot in understanding the world in a more mystical, vibration-based way.

The word cursive (as in “writing in cursive”) may come from the word curse, a stronger and more negative form of spell. The words write, rite and ritual have the same roots. The opposite of a curse is praise which sounds similar to prays and raise and rays. My connecting these four words might seem a little delusional to you, but such are the ways of a person who lives by intuition. Praise has the same “Latin” root as the word price as in value. Thus, to praise something is to value it. If you wish to increase in value or your product to increase in value, simply praise it a lot.

Apart from double meanings, I’m also somewhat aware of meanings across languages. When I was a teenager I didn’t want to just “get a job”. Everyone was telling me to “just get a job”, but I resisted the notion. Is it a coincidence that the word “job” means persecuted in Hebrew and that thus, so many people hate their jobs? Instead I wished to find my calling, follow my vision and passion.

I think McDonalds and Burger King could have been much more successful in German-speaking countries if they didn’t call their meat “Burger”, which in German means “Citizen”. People don’t want to eat their fellow citizens.

I see a lot of “Dick’s sporting goods” in the area I live. I don’t think the double-meaning is a coincidence, especially in context of the Logo. The founder of Dick’s was being cheeky, I believe. It’s a subtle form of sex-marketing, just like the Tesla Logo.

Another aspect of language I’m sometimes aware of is what a thing means backwards. The most prominent examples of this:

Here’s an automatic text-reverser if you want to play with this a little: Spell It Backwards

Did this article make you more curious about words and their meaning? If so, it’s fulfilled its purpose.