Do symbols have an effect on the body? This is a text I’ve borrowed from the 1994 book “Mind Machines you can Build” by George Harry Stine. I’m not endorsing the book, merely quoting an interesting section for your educational benefit.

The purpose of this experiment is to demonstrate the effect of two different but similar symbols on the physical
strength of the muscles of the body. Any person can conduct this experiment, but it takes two people to do it. There’s nothing harmful about it, but it can cause some long-term bursitis-like discomfort if the experiment isn’t, in effect, “turned off.” The materials required are amazingly simple and readily available.

The procedure is also simple and can be conducted by anyone. Furthermore, the experiment is a valid scientific
one because it can be described in writing, carried out with no prior training,  and produces vivid and repeatable results in 99.999999999% of all cases. (There is nothing in the Universe that can be counted on 100% except
death and taxes, of course.) Statistical analysis isn’t necessary. However, like any experiment, even firmer
results can be obtained through the use of double-blind techniques. On a sheet of paper, draw with a ball-point pen or a
pencil a spiral such as shown in Figure 7-1. Accuracy, size, or artistry are not important. What is important is the
direction of the spiral. As shown, it is a left-handed spiral. On another sheet of paper, draw another spiral like
the one shown in Figure 7-2. Note that this is the mirror image of the spiral of Figure 7-1. It is a right-handed spiral. 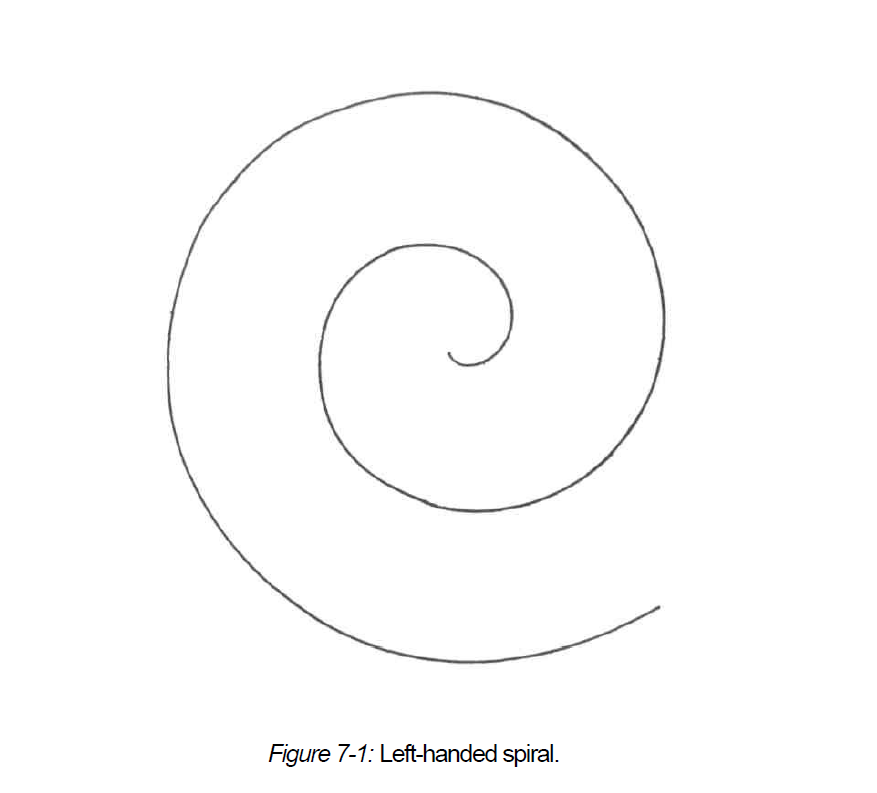 One person (the subject) stands and extends his/ her arm (either arm may be used) horizontally out from the body with the palm of the hand facing down. (Fig. 7-3) The other person (the experimenter) stands facing the subject, places one arm on the subject’s shoulder and the other arm on top of the subject’s extended arm over the wrist. The experimenter then pushes down on the subject’s
arm at the wrist. The subject must resist this force with the muscles of the arm. The experimenter pushes down until his
actions overcome the resisting muscle force of the subject. Both persons should note the amount of force required to move the arm and to resist the movement. With his free hand, the subject now picks up the piece of paper with the left-handed spiral drawn, on it and
holds the paper to his chest. The muscle-force experiment is now repeated. It should be slightly easier for the subject to resist the
downward force the experimenter is exerting on the outstretched arm. The subject then puts down the paper with the lefthanded
spiral, picks up the paper with the right-handed spiral, and holds the paper to his chest. The muscle-force experiment is repeated.
The results are usually quite dramatic. The subject is almost totally unable to resist the downward force being applied to his arm by the experimenter. For some reason unknown to us at this point in time, the act of holding a left-handed spiral symbol against the
chest results in a weakening of the ability of the person to resist a force being applied to the muscles of his body. of the experiment. The reapplication of the left-handed spiral symbol to the chest results in a regaining of the
muscle strength. The experiment should also be repeated using the subject’s other arm, again to confirm that this phenomenon
doesn’t depend upon using the right or the left arm. The results of this experiment are always striking. Furthermore, they are repeatable.

The only caveat that applies to the experiment is this: The final step in the experiment must be to “turn off”
whatever factor is weakening the arm muscles. The final step must be to have the subject hold the left-handed spiral to his
chest while the experimenter repeats the arm displacement. I discovered the hard way the consequences of performing the
right-handed spiral experiment last. Within a week, the muscles of my arm became quite sore and I had trouble
raising my arm above the horizontal because of dull muscle pains that I initially mistook for bursitis. When 1 mentioned
this to the experimenter who’d been working with me, we realized what was probably taking place and then “turned
off” the experiment as described above. It was most dramatic because the bursitis-like pain disappeared immediately. If
this is “psychosomatic” as many critics have claimed, it is certainly the quickest, easiest, and cheapest way to get rid of
bursitis that I’ve ever encountered because that pain was as real as any I’ve ever perceived.

Why does the holding of a scrawled symbol again the chest produce such dramatic and striking results?
We don’t know. It shouldn’t work. But it does. It qualifies in all respects along with the rest of the machines
herein as part of “protoscience,” something which we can demonstrate but cannot yet explain. In short, it is pure and simple magic.

Editors note: In light of this it would be interesting to muscle test a variety of symbols and  company logos. For more information on energy-levels see also my book “Levels of Energy”. For more info on holding things against your chest, see my recent video “Your body can read your written intentions“.

Update to this article. The following Feedback about it was posted on my Telegram Channel: 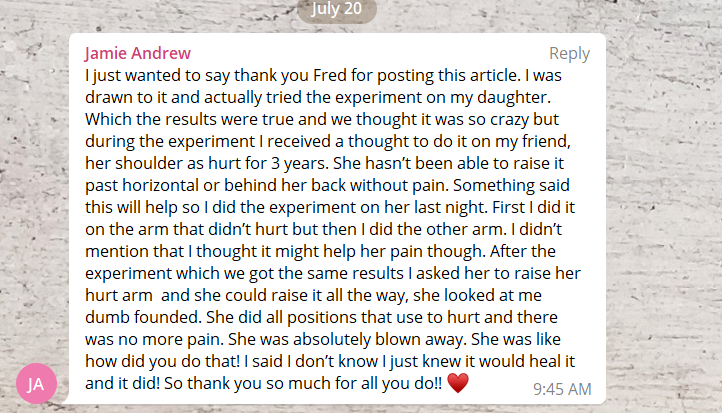